Privatisation: A Formula for Provision or Perversion of Municipal Solid Waste Management?

SOURCE: Cross posted from http://www.environmentportal.in/files/privatisationofmswm_0.pdf
Brooks Anderson, June 2011
Over the past decade, the Indian government has encouraged localities to privatise municipal solid waste management (MSWM), an essential public service that local bodies have tended to perform inadequately. Surprisingly, the reasons for, and consequences of this major change in governance have been subjected to far less scrutiny than is warranted by its significance. This paper compares the theory and expectations of privatisation with the performance record of privatised public services in several countries in order to inform and stimulate scrutiny of India’s determination to privatise MSWM.
Advocates of privatisation of municipal solid waste management promote privatisation as a recently devised solution for many of the problems plaguing government-run services. For example, USAID claims that privatisation offers “cost savings, new technologies, improvements in efficiency and effectiveness and reduction in the need for permanent sanitation staff. . . . This new approach, which emphasizes commercial viability, enables Indian cities and urban authorities to respond more effectively to the greatest needs: increasing access to services and improving service levels. Significant benefits for the poor, in particular, can be achieved through a commercial orientation” (USAID 1999:1 & 4).

Edward Glaeser is among today's most widely acclaimed urban economists, who has long argued for the benefits of  agglomeration in cities and a fan of Bengaluru's growth.  In this article, published by the Legatum Institute he shows why he thinks that Bengaluru is a "model of how an urban agglomeration can bring prosperity to a poor country". His most recent publication is Triumph of the City.

Abstract of the Report
Bangalore is among the most successful cities in India and the developing world. Its population growth has been dramatic and it has generated vast amounts of wealth and prosperity. Bangalore’s economic success reflects the ability of cities to connect smart people who then work together and learn from one another. In the developing world, places like Bangalore also serve as conduits for knowledge and capital and services across continents. The vitality of Bangalore contrasts vividly with the continuing poverty of rural India. That contrast reminds us that cities are a crucial part of economic development. It makes far more sense to directly address the challenges of urban growth, such as unclean water and congestion, rather than to artificially constrain the expansion of mega-cities like Bangalore.
Download the Report >>
Posted by Kanhu C Pradhan 0 comments

"Indian cities matter today" – at least in print. They are on the cover pages of magazines like India Today and GEO. The scale and speed at which India will get urbanized in the next 20 years has few precedents in history, making urban India a twenty-first century celebrity whose entourage comprises scholars, planners and investors. There is concern that unless the huge increase in urban population is preempted and proactively planned for, costs of congestion will easily eclipse the benefits of scale. An important study that informs the policy discourse on Indian cities is the McKinsey 2010 Report, India’s Urban Awakening: Building inclusive cities, sustaining economic growth. This essay presents the contentions of the report and concludes with a critique.


The November 22 Delhi Policy Conference, the final event in the India Urban Conference 2011 series, is meant to focus attention on the possibilities and challenges of harnessing India’s urbanisation for inclusive national development. The programme is designed to elevate two opportunities on the national policy agenda: first, India’s urban transformation as a necessary condition for sustained economic growth, and second, the potential of this transformation to enable effective, inclusive and sustainable rural and urban development. Sessions are designed to highlight new as well as often overlooked evidence on the role of urban areas in India’s overall development, the functionality of fiscal and administrative mechanisms for managing urbanisation, and the prospects for and barriers to inclusive urbanisation. The conference is centred around three discussion sessions and three keynote speeches on salient questions in the ongoing debates about urban policy and implementation for inclusive development. Each discussion session is structured to elicit and include perspectives on these portrayals of the urban and its dynamics from a wide range of policymakers and other stakeholders involved in the urban transition.

SOURCE: Cross posted from http://urbanizedfilm.com/
Urbanized is a feature-length documentary about the design of cities, which looks at the issues and strategies behind urban design and features some of the world’s foremost architects, planners, policymakers, builders, and thinkers. Over half the world’s population now lives in an urban area, and 75% will call a city home by 2050. But while some cities are experiencing explosive growth, others are shrinking. The challenges of balancing housing, mobility, public space, civic engagement, economic development, and environmental policy are fast becoming universal concerns. Yet much of the dialogue on these issues is disconnected from the public domain.
Who is allowed to shape our cities, and how do they do it? Unlike many other fields of design, cities aren’t created by any one specialist or expert. There are many contributors to urban change, including ordinary citizens who can have a great impact improving the cities in which they live. By exploring a diverse range of urban design projects around the world, Urbanized frames a global discussion on the future of cities.
Urbanized is the third part of Gary Hustwit’s design film trilogy, joining Helvetica and Objectified. Urbanized will premiere at film festivals later this year, followed by cinema screenings worldwide, television broadcasts, and release on DVD and digital formats. Join our mailing list or follow Gary on Twitter to stay informed of new announcements.
Posted by CPR Urban Team 0 comments

Email ThisBlogThis!Share to TwitterShare to FacebookShare to Pinterest
Tags: Multimedia 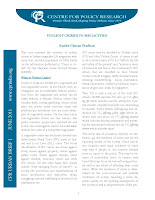 Urban Poverty in China by Fulong Wu, Chris Webster, Shenjing He and Yuting Liu 2010 Cheltenham, UK: Edward Elgar 259 pp ISBN: 978 1 84720 969 6
This book originates from an ESRC DFID funded project, which allowed the authors, based at Cardiff University in the UK and Sun Yat-Sen University and South China University of Technology in Guangzhou, China to survey over 1800 households in twenty five neighbourhoods across the six cities of Harbin, capital of the northeast province of Heilongjiang; Nanjing, capital of a fast growing eastern coastal province, Jiangsu; Wuhan, capital of Hubei province in central China; Xi’an, capital of Shaanxi in the northwest; Kunming, capital of Yunnan in the southwest and Guangzhou, capital of the booming southern coastal province of Guangdong.

Book Review: The Death and Life of Great American Cities

The Death and Life of Great American Cities by Jane Jacobs (1961) New York: Random House, Inc. 448 pp ISBN: 0-679-74195-X
Published in 1961, the book was written at a time when American cities were beset with massive redevelopment projects. The Death and Life of Great American Cities is Jane Jacobs’s take on what makes cities work and much of it is a critique of modern planning theory. Jacobs hopes to convince her audience that many of the ongoing urban renewal programmes were in effect causing more harm than good. She explains “why the wrong areas are decaying and the wrong areas are refusing to decay”.

A simple initiative in the Philippines is bringing a bit of brightness into the lives of the country's poorest people.
The project is called "Litre of Light", and the technology involved is just a plastic bottle filled with water.
It is an environmentally-friendly alternative to an electric light bulb, and it's virtually free.
The BBC's Kate McGeown reports from Manila

Email ThisBlogThis!Share to TwitterShare to FacebookShare to Pinterest
Tags: Multimedia

Hong Kong (CNN) -- Another humid summer night in Hong Kong and another fly-poster is discretely pasting what looks like a photograph of an emaciated girl onto a wall on a busy side street.
But this is no ordinary fly-poster.
He is unassuming Canadian street artist Kaid Ashton, and the subject in the print is a young girl he recently photographed in the Filipino capital, Manila.
For the past seven years he's been traveling to some of the world's most dangerous slums documenting the people he meets with his camera. He then posts his work on walls around the cities he visits.
Now he's in Hong Kong, bringing his images of slum life to the busy streets of one of Asia's financial hubs. One of the world's wealthiest cities may seem an incongruous setting for Ashton's work -- but that's what he wants.
His current project, "People in Poverty," consists of 30 intimate portraits snapped during Ashton's travels to some of Asia's poorest places -- including the Tondo district and Maharlika settlement of Manila, Philippines. Ashton prints the photographs on wallpaper-like material before sticking them outdoors using a technique known as "wheatpasting."
Ashton aims to make people reconsider their surroundings by placing his photographs in unexpected locations, be it the wall of a housing estate or the pillar of an underpass.
He is always on the lookout for a potential spot, and spends his days scouring the city to find the perfect place.
READ MORE
Posted by CPR Urban Team 0 comments